Newstart: Why Centrelink’s job assistance program is useless for grads 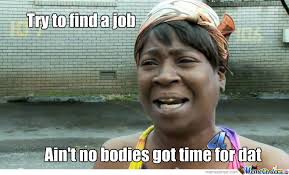 I spent eight months on Centrelink’s Newstart, where the government gave me a pittance hand out in return for me applying for ten jobs a fortnight. The aim? To get me out of the system as quickly as possible and back into functioning society.

Of course, when I first lost my job, I didn’t think it would be that hard to get another – because every job you apply for after your first is easier, isn’t it? Unfortunately, it was very close to Christmas and the chances of me snagging a job in my field were pretty thin and I quickly realised that in order to survive, I needed to get anything I could. I started applying for Christmas casual jobs, figuring that they were only two or three month contracts so it would be ok if I quit in the new year when I found something more permanent.

How wrong I was! Competing for Christmas casual jobs against high school grads, who cost half what I do to hire, was never going to work in my favour. I went for all the retail jobs and I was well qualified for ALL of them – because I’ve done five years in retail and in my last job was in training to become manager before I hit the big time and got my production assistant job in Sydney.

As part of the money for job applications agreement that is Newstart, I was required to attend (initially monthly and later weekly) meetings with a job assistance counselor. I went to Communicare in Newtown.

Now, I whinged regularly and loudly about Communicare (or as I liked to call it “Communi-don’t-care”), but they were all very good at their jobs: which was to train people who had no skills or qualifications into jobs so that they could get off Centrelink. They could teach you how to write a resume, how to write a cover letter, how to retrain in a different field, how to dress for a job interview…

They knew how to train people to be retail assistants, truck drivers, factory workers, bus drivers, etc… All important, all completely valid jobs – but I didn’t spend five years and tens of thousands of dollars to drive a bus. I had skills, I had qualifications, I had a solid resume with excellent references, I knew how to dress myself and I had my first media job under my belt.

Communicare was not equipped to handle me at all. I already knew everything they could teach me – and not in a cocky “I’m too good for this” kind of way, but I’d been doing the whole thing for a long time, I knew how to get a job – I’d had so many jobs before!

Communicare isn’t the only job centre you can go to, there’s hundreds of others and they all have the same goal: get people off Newstart and back into the work force as quickly as possible. They don’t care about struggling grads with identity crises, they aren’t there to counsel or give advice to people who have had jobs and resumes and higher education. They’re just not equipped for us – and it MIGHT just be because we’re not exactly their target market and usually, we’re not stuck in the system…

My counselor looked over my resume and some of my past cover letters, she told me it was fine, she told me I’d have a job in mere weeks – and when that happened, she wondered if I was applying for enough jobs. Yes I was! I was exceeding the ten required jobs to get my fortnightly dole payments! She didn’t care about my writing portfolio, which I only found out months later was in terrible shape. She didn’t mention how I could use LinkedIn to my advantage. She didn’t know how to make me stand out in a sea of thousands. She didn’t know how to give me the advice I needed because she wasn’t trained for it – I had to learn it ALL for myself. And that’s fine – except what’s the point of spending an hour every week with her when I got nothing from it?

I ended up with depression, I ended up angry at the system and I BEGGED for Centrelink to give me my payments without having to visit Communicare – because I was definitely applying for lots of jobs, I wanted a job more than anything in the world!

Now I have a fantastic job, I have a mentor I didn’t even realise was my mentor all along, I have hundreds of recruiters and experienced people helping me revamp my resume, my portfolio, my LinkedIn, to show off exactly how bloody spectacular I am. Sure, I’m lucky – but I had to go through hell to get there.

I hope I never have to go back on the dole again, I hope I never have to step foot in Communicare (or similar) again, I hope that someone who works for the system reads this… Because there is SO much that isn’t being done, simple, little things, that would help people like me get off Centrelink faster. We need help just as much as the others on Newstart – we’re just as vulnerable, just as confused, just as likely to give up when nothing works because we were promised the world if we worked and studied hard so WHY WON’T SOMEONE GIVE US A CHANCE? We’re even more dramatic because many of us are still growing out of being a teenager – we still feel in capital letters.

I’ve got ideas for Communicare (and the like) – lots of them. I plan to share them here, because something’s gotta give and I think a grad-focused job assistance program needs to happen. Like now.

What improvements do you think job assistance agencies need to make?

← Cheap Thrills: Chalk it up!
Why Your Vote Is Important (Promise It Aint Cliché) →

Stinge, cheapskate, tightarse, thrifty, penny-pincher, scrooge. Whatever you want to call me, that's what I am and I'm proud of it.

How else is a girl supposed to survive the big city otherwise?

What the cheapskates are loving most:

You can find me at these places…